Are you looking for Linux distributions that give look like popular Apple’s macOS? Then here is the list to go through…

Although it is impossible to get exactly all features just like macOS in Linux because it is a proprietary one, however, we could install one in open source which at least gives feel like it.

The reason behind the infatuation of macOS is the graphic elements and transitions offered by it. And this is the reason why often people around the world trying to install skin or some third party Mac OS X Transformation packages to even make Windows looks alike mac.

Another is the reasons for all this is to experience the dock and since the Apple products are costly thus, everybody couldn’t afford them.

Indeed, the Hackintosh like methods are available online to install and use macOS but they are full of technical complications and incompatibility to our exiting PCs. Therefore, why not use the Linux with all its open source independence while having the MacBook like UI.

Moreover, with Linux customization scope is limitless, we can make our Debian or Ubuntu look like macOS with the help of Macubuntu transformation pack.

Before starting this list of open source operating systems look similar to macOS, one thing needs to know, this internal working and other features will be remain of Linux.

Well, Deepin is Ubuntu base opensource operating system that is popular because of its desktop environment and apps which gives not only macOS even Windows users a quite familiar feeling. However, earlier being a Chinese company & developer of this Linux OS, few people quite sceptical in terms of data privacy, however, that has been cleared by its team that there is nothing unethical happing in Deepin.

The DDE (Deepoin desktop environment) offers both dock or Windows 7 like start menu along with notification panel. Even the icons are quite eye-catching.

Also, all the day to day needed apps come pre-installed in Deepin, moreover, its App store has lots of useful apps ready to download on just one click. Yes, the issue I face while using it on my laptop was the wifi signal issues. Otherwise, it was smooth and easy to handle.

If you are looking for a distribution that will take you as far as possible away from the image of a nerdy hacker type driving around a terminal interface, then Elementary OS is exactly what you need. It’s probably one of the most attractive distribution, with a style similar to macOS. The excellent desktop environment of this operating system is called Pantheon and is based on Gnome.

The latest version of Elementary OS also has its own application installation user interface called AppCenter. It’s a wonderfully easy way to install apps outside of the terminal, which is handy since not many are preinstalled.

However, it comes with the Epiphany browser, the Geary email client, and some basic “tool apps”. You may need to add more programs. However, this is with the integrated AppCenter, which contains chargeable programs that have been specially developed for the operating system, e.g. Quilter for aspiring authors or spice-up to create presentations, easily possible.

BackSlashLinux is another Linux distro like mac but not that much popular in comparison to above two, however, still, the developers of this Linux distro have done a splendid job to depict macOS.

It is developed by an India software developer team and based on Debian. Backslashlinux comes with icons and dock resemble macOS one. It is one of the Linux distros with closes MacOS look.

In the above screenshot, we can see the icons of Backslashlinux exactly similar to MAC.

Zorin OS is based on Ubuntu and was developed for Linux beginners, so it should be particularly easy to use. Special attention was therefore paid to a clear user interface. The user interface can be adapted with just a few clicks so that it is similar to that of Windows 10 and macOS. The Windows emulators Wine and PlayOnLinux are preinstalled so that many Windows applications can also be run on Zorin OS.

In the above screenshot, we can see Zorin OS Linux doesn’t offer exactly the same user interface like macOS but a touch of it. It offers a dock which can be adjusted to different positions as per the user requirement. Thus, at least give it a try if you are a beginner to Linux.

There are several variants of Zorin OS:

Do you want to make Ubuntu look like Mac OS X? If so, we’re going to show you how to do it, step-by-step.

It doesn’t matter whether you have a bad case of Apple envy, or you simply appreciate the design aesthetic of Apple’s OS; there’s nothing wrong with aping the appearance of a rival operating system.

After all, the whole point of using Linux is that you are free to do things like this — and hey: you certainly can’t make macOS look like Ubuntu!

A stack of mac GTK themes, icon sets, fonts and cursors are available for Linux, just a quick Google away.

The ones included below are the ones we use/think give you the best Mac-like look on your Linux box, But don’t be afraid to explore DeviantArt, GitHub and other avenues if our choices don’t quite match with your tastes.

To achieve the most Mac-like look on Linux you need to use the most appropriate desktop environment and that is GNOME Shell.

This is not a slight against other desktop environments (DEs) as Unity, Budgie, MATE and Cinnamon can all be moulded to resemble Cupertino’s computing OS too.

But GNOME Shell is the most customisable desktop environment. This is a key ask in a task like this. GNOME Shell lets you theme and re-arrange everything you need to with the least amount hackery or fuss.

If you’re using Ubuntu 18.04 LTS or later you already have everything you need to get started, so skip ahead.

But if you don’t have GNOME Shell installed on Ubuntu you will need to install it first. 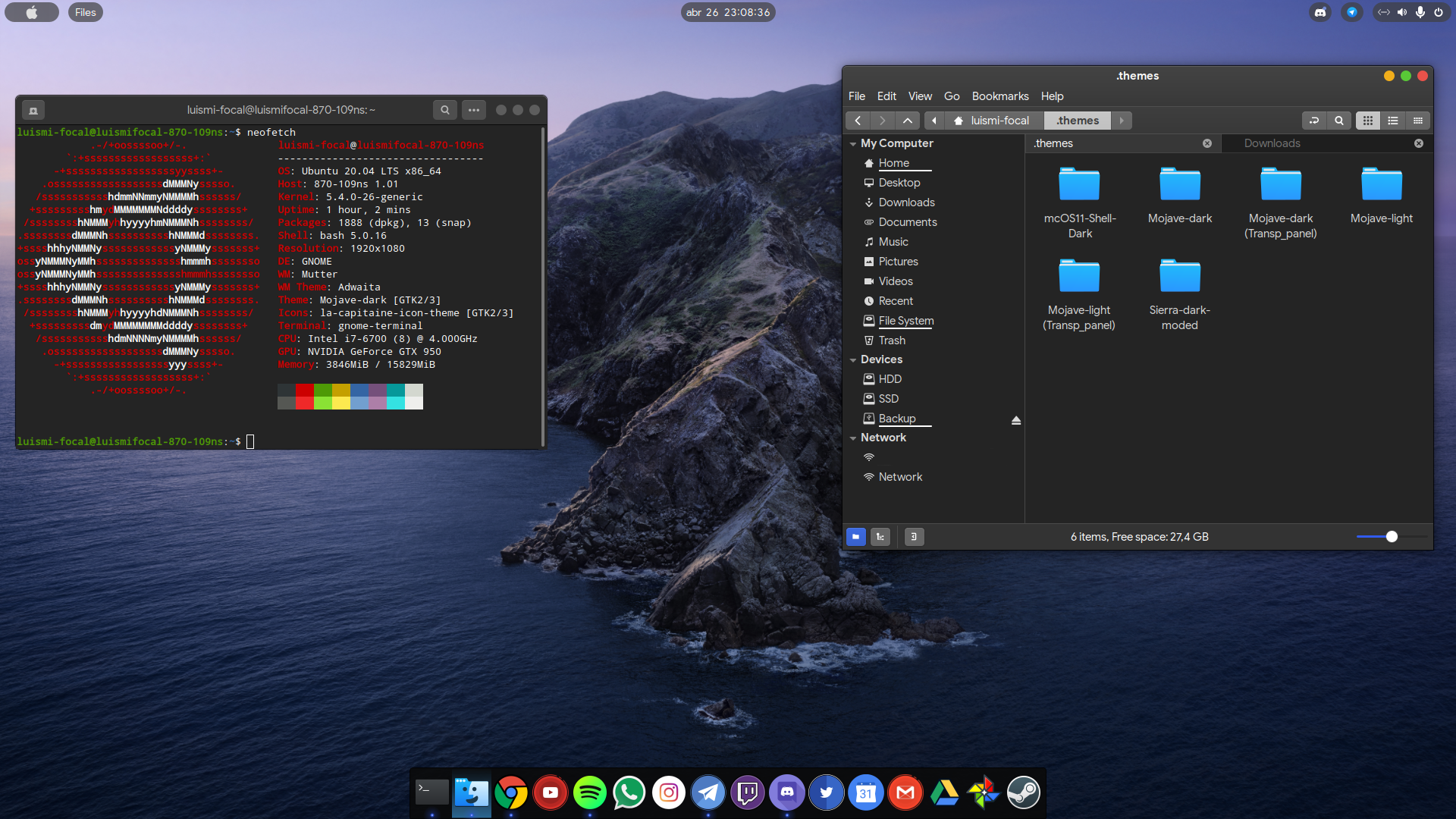 This is easy. Just click the button below and follow in the on-screen prompts (select ‘lightdm’ as the display manager when asked):

You’re also going to need to the GNOME Tweaks tool in a few steps time, so install that now too:

Once both installations are complete you need to logout and select the ‘GNOME Shell’ session from the Unity Greeter:

A word on using Unity

One thing GNOME Shell can’t offer, that the Unity desktop can, is global menu support.

Now, I don’t consider this to be a negative as more and more applications use use Client Side Decorations, making the need for a global menu redundant.

But if having an omnipresent set of app menus stripped across the top of the screen is part of the Mac experience you don’t wish to lose, stick with Unity.

The single easiest way to make Ubuntu look like a Mac is to install a Mac GTK theme.

Our top recommendation is the ‘macOS Mojave’ theme by Vinceluice. This is a near-enough pixel-perfect clone of Apple’s OS skin, and is available in light and dark versions. It’s one of the best designed Mac GTK themes out there (it also has a matching GNOME Shell theme).

If you’re running the older Ubuntu 16.04 LTS release you can use the competent ‘macOS Sierra’ clone created by the B00merang project:

Tip: How To Install GTK Themes

Once you download your chosen macOS theme from the link(s) above, you will need to install it.

To install themes in Ubuntu first extract the contents of the archive you downloaded, then move the folder inside to the ~/.themes folder in your Home directory.

If you do not see this folder press Ctrl + H to reveal hidden folders. Next, find the .themes folder or create it if it doesn’t exist. Move the extract folder mentioned above to this folder.

Finally, to change theme, open GNOME Tweak Tool > Appearance and select your chosen theme (and the GNOME Shell theme, if you also downloaded one).

Next grab some a Mac Icon set for Linux. A quick Google will throw up a bunch of results. Most, sadly, aren’t complete enough to function as a full icon set, so you’ll also want to use (and in some cases manually specify) a fall back icon theme like Faba, or Papirus.

To avoid all of that hassle you may wish to use the fabulous ‘La Capitaine‘ icon pack.

What’s great about La Capitaine is that it’s a proper Linux icon set, with custom macOS inspired icons for many Linux apps and not just a direct port of mac icons to Linux. It’s also totally open-source, and is available to download from Github.

How to Install Icon Themes

Once you’ve downloaded your chosen theme from the link(s) above you need to install it. To do this first extract the contents of the archive you download, then move the folder inside to the ~/.icons folder in your Home directory.

If you don’t see this folder press Ctrl + H to view hidden folders. Next, find the .icons folder or create it if it doesn’t exist. Move the extract folder mentioned above to this folder.

If you’ve used Mac OS X / macOS at some point in the past few years you’ll know it has clean, crisp system typography.

A quick Google should turn up plenty more information (and links to download San Francisco font) but be aware that neither font is not licensed for distribution — so we can’t link you to it, sorry!

Thankfully there’s an open-source alternative to ‘Lucida Grande’ called Garuda. It’s even pre-installed out of the box on Ubuntu, so you don’t need to go on a font safari to find it.

Head to GNOME Tweak Tool > Fonts and set the ‘Windows Titles’ and ‘Interface’ fonts to Garuda Regular (or any other font you wish).

If you use Unity you can use Unity Tweak Tool to change the font on Ubuntu.

Ask people what a Mac desktop looks like and chances are they will mention its ubiqutious desktop dock. This is a combined application launcher and window switcher.

If you opted to use GNOME Shell back in Step 1 install the excellent Dash to Dock extension from the GNOME extensions site. This dock can be adjusted, tweaked and tune to look exactly like its macOS counterpart.

Dash to Dock doesn’t look very mac-ish by default so you will want to dive in to the GNOME Tweak Tool > Extensions > Dash to Dock > Appearance to change the colour to white, and lower the opacity.

If you chose to stick with the Unity desktop you can set the Unity Launcher to hide (System Settings > Desktop > Behaviour) and install Plank, a desktop dock, to handle app launching and window switching:

Plank can be configured with all sorts of themes too, making it easy to replicate the Mac OS X experience. Gnosemite is a faithful mac Plank theme worth a look.

That’s it; we’ve achieved our aim to make Ubuntu look like a Mac — now it’s your turn.

We’d love to see a screenshot of your mac-inspired creation so do feel free to share one in the comments.