Note: This is a followup of my November 2011 blog post on installing the NWN2 expansions on Mac OS here.

The most complete software adaptation ever of the classic pen-and-paper Dungeons & Dragons role-playing game, Neverwinter Nights is a best-selling PC game and the latest release from BioWare Corp.

Edited Jan-2-2015 to update the links to the Windows patches since the original NWN2 IGN Vault ceased operation and the patches are now hosted on Neverwinter.org. Also added a link to the Aspyr Mac final patch on mac.Softpedia.com since Aspyr no longer hosts it.
It can be challenging to play Neverwinter Nights 2 on a Macintosh. Each of the options for doing so has pros and cons.
Assuming you have a good enough graphics card to play the game it is possible to run it natively on OS X 10.5, 10.6, and 10.7. Aspyr published NWN2 for Mac which was distributed on DVD and eventually released a patch available on their support site to bring it to version 1.23.1765 which is current with the last official Windows NWN2 patch. The limitations of this are that it requires the DVD both to install AND to play, it does not include the NWN2 Toolset, it does not include the expansions (MotB and SoZ), and there is no built-in update feature for patching. The Aspyr patch may be found on the Aspyr site here or on the mac.Softpedia.com here. While it is possible to get the expansions installed you either have to rip the appropriate files from the Windows DVDs or install NWN2 for Windows and the expansions on a Windows partition or VM and then copy the required files over to Mac OS X. Either way it can be a lot of trouble and the second way requires that you have access to a copy of Windows and the Windows version of the NWN2 OC in addition to the MotB and SoZ content.
If you have Mac OS X 10.6.6 or later and have access to the Mac App Store (requires Mac OS X 10.6 or later) then you can buy the 1.23.1765 version on the App Store and download and install and play without requiring a DVD drive. Other than not requiring a DVD to install and play this has the same limitations as buying the Mac DVD version - no toolset, no expansions. In addition when you play it automatically updates the ini file with the cd keys with the cd key from the download, which is a problem if you want to use a different key. Other differences from the DVD version are that the game files, instead of being in folders in the Applications folder, are stored in the Neverwinter Nights 2.app file itself, and the game documents (saves, override folder for custom content, etc.) are stored in the ~/Library/Application Support folder rather than the Documents folder. There are also some minor bugs introduced with this version.
Those are the only two options for running the Mac version of NWN2, but it is possible to run the Windows version of NWN2 on the Mac as well using a variety of technologies. A key advantage of using the Windows version is that it is the only way to use the NWN2 Toolset.If you have access to a decent version of Windows (Windows XP or Windows 7) and a DVD drive you can install those on a Bootcamp partition on your Mac and use either Bootcamp or Parallels (I have done both) to play the game. If you purchase the disc versions (separately or NWN2 Platinum) then you will need to use the Update feature to apply the patches to get to version 1.23.1765. Once patched to 1.23.1765 the Windows version (unlike the Mac disc version) no longer requires the discs to play. Getting patched is a hassle though, even with the built-in update feature. It takes a very long time and has to download a ton of content and if the update feature isn't working is even worse.
Alternatively you can buy the Steam version and avoid the hassle of patching and discs. The disc-based and Steam versions install the game files and toolset in different locations, but they do work. This requires that you have Windows though. 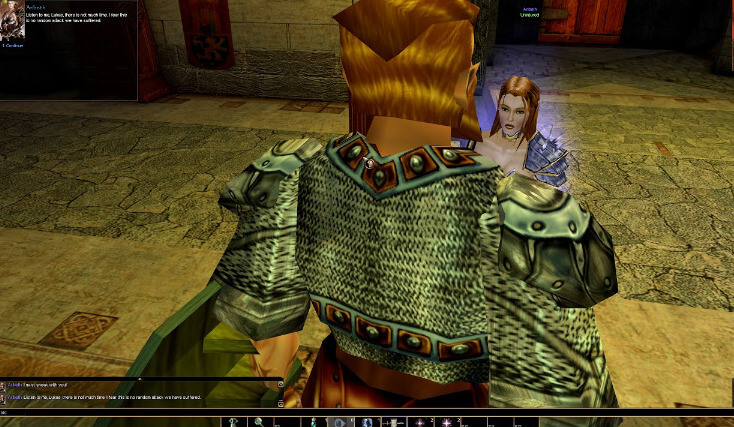 You can also buy the NWN2 Complete collection on GOG which includes the fully patched Windows versions with the OC, MotB, SoZ, and MoW. These can be installed in a Wineskin (see blog post here) in order to play on a Macintosh (no Toolset compatibility in the Wineskin unfortunately).
If you do not have or want to use Windows but you do have the Windows versions of NWN2, such as the NWN2 Platinum discs or NWN2 Gold + SoZ discs or NWN2 OC, MotB, and SoZ discs, then it is possible to install from the NWN2 discs directly into a Wineskin Wrapper and run the game without Windows on Mac OS X 10.5 or later. Doing so will allow you to play NWN2 without using a Windows partition or VM, without requiring a disc, and with any legal CD keys you wish. While the program files are installed into the wrapper, the user documents (custom content, override folder, saves) are stored in the Documents/Neverwinter Nights 2 folder. Unfortunately I have been unable so far to get the NWN2 Toolset running from within a wrapper, but that may simply be a matter of time. In the meantime if you have the Windows version you can at least run the toolset in a Windows VM or partition.
Here are the instructions I have for creating a NWN2 Wineskin Wrapper and installing the Windows versions of the NWN2 OC, MotB, and SoZ and patching to 1.23.1765. I used the NWN2 Platinum dics to do this install.
NWN2 Platinum (disc) Wrapper notes
Advantages of this:
- Like the Mac App Store version does not require a disc in the drive to play.
- Like the Mac disc client version stores saved games and custom content in ~/Documents/Neverwinter Nights 2/ folder rather than inside the ~/Library/Application Support/Neverwinter Nights 2/ folder.
- Uses the keys specified rather than overwriting the NWN2 OC key which the Mac App Store client does.
- Allows MotB and SoZ to be played without requiring an installation of Windows. 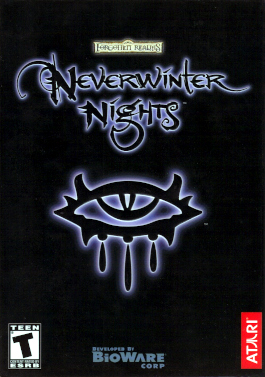 - Should also be compatible with installing MoW but I haven't tried this.
Disadvantages:
- Possibly incompatible with multi-player LAN or internet play. (not tested)
- Requires the owner have the Windows version of NWN2 OC.
- Not compatible with the Toolset... yet (no Mac version is at this point).
Instructions for creating the wrapper:
Note: Rather than creating a wrapper I recommend downloading the wrapper I link to from this blog post.
Created new wrapper using Wineskin 2.5 and Engine WS8Wine1.3.37 (also tried WS8Wine1.3.34, CXG10.3.0, but those cause crashes at the main menu.)
Use winetricks to install:
directx9
dotnet20
vcrun2005
gdiplus 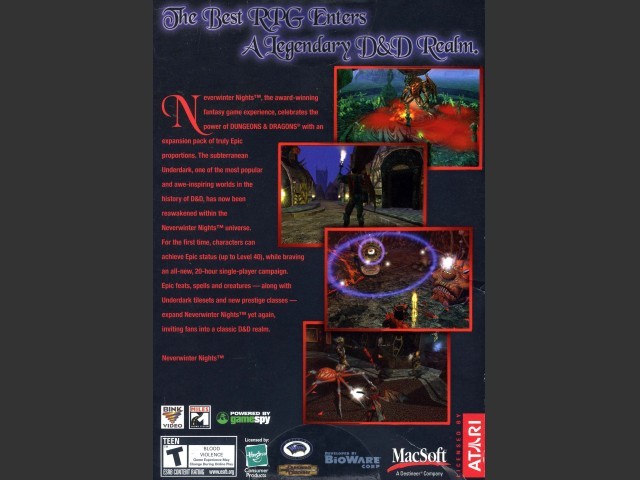 dxdiagn
corefonts (may not be needed)
tahoma (may not be needed, but it is the default Toolset font)
mono28 (may not be needed)
My best experiences installing NWN2 + MotB + SoZ has always been to install the NWN2 OC and then MotB and then patch, and then SoZ and patch again. So that is what I have done here. It may however not be the most efficient way to install.
Insert NWN2 disc and run Wineskin Install Windows Software setup.exe
Do not register.
Do not install XFire and do not update.
Before installing MotB download the following Windows NWN2 patches from the Neverwinter Vault Patch Catalog into the Program Files/Atari/Neverwinter Nights 2/ folder. DO NOT DECOMPRESS THEM. (if you are not an english speaker then download the equivalent pcx1 versions for your language.) (The install of MotB gets you to version 1.10.1115, so except for the modfix you only need to patch from 1101115 forward.)

nwn2_pcx2_english_from1221586_to1221587.zip
nwn2_pcx2_english_from1221587_to1221588.zip
nwn2_pcx2_english_from1221588_to1231763.zip
nwn2_pcx2_english_from1231763_to1231765.zip
Insert SoZ disc and run Wineskin Install Windows Software setup.exe
Do not register.
Update. This should get you to version 1.23.1765. If for some reason the update stops at the end of a patch without going on to the next one just click the Close button and then click the Update button again and it should continue with the next one. If you have to you can set the Win EXE to Wineskin > Advanced to NWN2Launcher.exe so that you can start the app and continue patching.
After the patching has completed you can delete the nwn2_pcx2_… patch files from the Program Files/Atari/Neverwinter Nights 2/ folder.
Restore the VO_X1.zip file to the Program Files/Atari/Neverwinter Nights 2/ folder.
Copy the icon from either the Mac client (if you have it) or from Paul the Tall's wrapper to the new NeverwinterNights2.app or create your own.
As I said above I have not yet gotten the NWN2 Toolset to work, but that is my goal. I have been able to get it to load and display the windows (see below) but unfortunately it does not yet function.
This page is a wiki. Please login or create an account to begin editing.

The long-awaited full sequel to Bioware's series based on Dungeons & Dragons rules. Neverwinter Nights 2 continues the tradition with an even deeper and more engrossing storyline, tremendously immersive character development, stunning graphics and an expansive multiplayer experience. (From the manual)

Downloads 1-7 are the parts of a zipped archive containing a disc image of the game DVD for v. 1.11.1152
Download 8 contains the official updater to v. 1.12.1295
Download 9 contains the final updater to version 1.23.1765, released in 2009. It can also be downloaded from the old Aspyr support page via the Wayback Machine, or directly.

Mask of the Betrayer, Storm of Zehir and Mysteries of Westgate are expansion packs for Neverwinter Nights 2 but they were only released for Windows. However they are Mac compatible and can be installed manually on a Mac. Instructions on how to do this can be found here. Windows versions of the game and expansions, required for this, can be found at Adventure Legends here, here, here and here. I do not know if you need to source the updaters for the Win version from elsewhere. It is recommended that you run the Mac version of NWN2 once before you attempt to install the expansion packs to ensure that folders created by the game are present. I have not attempted to install the expansion packs myself and so cannot provide any additional guidance.

The game may not install on modern Mac systems.