WaveLab 10 offers several tools and enhancements that are exclusive to the Pro edition, such as allowing users to integrate external effect devices into the signal flow by providing more flexible ways to integrate external hardware effects. New to WaveLab Pro is also Reference Track for adding a reference audio file and then toggling between the reference audio file and other tracks. WaveLab Pro now also opens up to other audio editors, providing users the option to access and modify audio with other editors like SpectraLayers from within WaveLab. Highlights of Audio Montage include the support of multitrack recording and non-destructive inline editing. WaveLab Pro 10 also records and renders live input streams through the Master Section and the inserted plugin chain.

Both Pro and Elements versions now offer video playback support, letting users arrange, edit and process the audio of video within Audio Montage. The Audio Editor now includes undo/redo edit history in order for users to move from one edit to the next and recover previous versions of edited part without losing the changes made to the rest of the audio.

The former Effect Tool Windows has been redesigned and renamed the Montage Inspector, making it easier to use. The track list in the Audio Montage has also witnessed an overhaul, with several improvements to the user interface. Due to the enhanced audio I/O routing provided in WaveLab 10, the audio connections settings dialog has also been renewed.

There are many more feature additions to WaveLab 10, making this major update move further ahead. 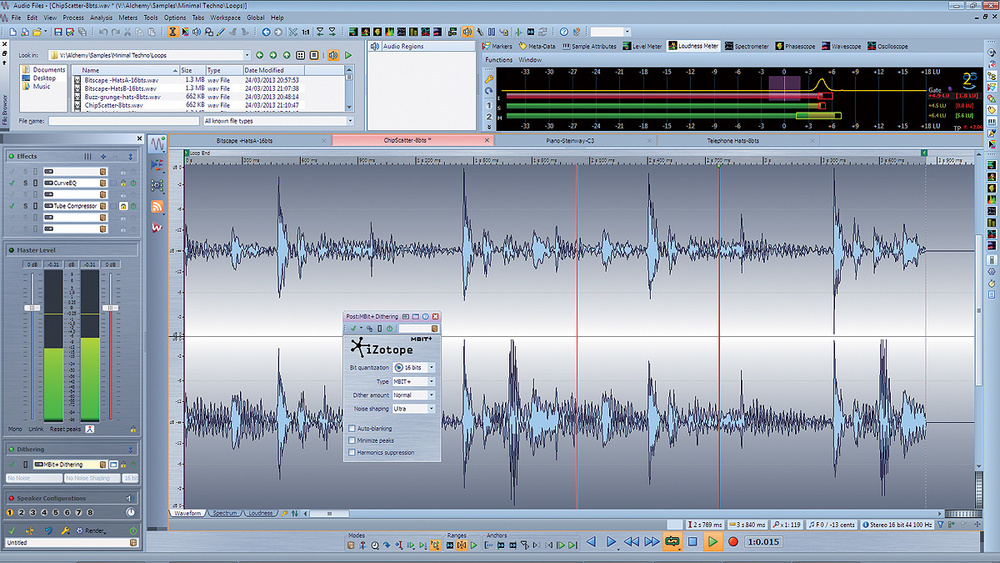 Releasing WaveLab 10 rounds out a very successful year for the Pro Audio business unit at Steinberg. After Nuendo 10’s overwhelming launch, we successfully introduced the sixth version of SpectraLayers Pro to the industry. And we’ve been working hard in order for the new version of WaveLab to remain the apex for advanced audio editing and mastering.

Steinberg WaveLab Pro 10 and WaveLab Elements 10 are available now for $479.99 and $99.99 respectively. An introductory price of $383.99 for WaveLab Pro 10 is in effect through the end of 2019. Various updates and upgrades are exclusively available through the Steinberg Online Shop. Customers who activated earlier versions of WaveLab since 17 September 2019 are eligible for a free, downloadable Grace Period update to the latest corresponding version. Both apps require macOS 10.13 High Sierra or later. WaveLab Pro 10 requires a USB-eLicenser dongle.

WaveLab LE 7 not only allows you to edit CD-quality audio material on two tracks, but also enhances recordings, using more than ten plug-ins that include several effects taken from our professional music software, Cubase. In addition, there is the integrated podcast function which allows for sharing music and voice recordings in the internet.

Probably the most important new feature in WaveLab LE 7 is the compatibility to Mac OS X operating systems, which follows Steinberg’s goal to make all products available on both PC and Mac platforms. Furthermore, WaveLab LE 7 has been completely rewritten and comes with a new, modern and easy-to-use user interface, which is based on the new WaveLab 7 family design.

WaveLab LE 7 comes with nine plug-ins, based on Steinberg’s renowned VST3 technology. Plug-ins such as the Steinberg Compressor, Limiter, the renowned StudioEQ from Cubase and Roomworks SE form a solid feature set. More than ten additional plug-ins including Leveler are also on board. 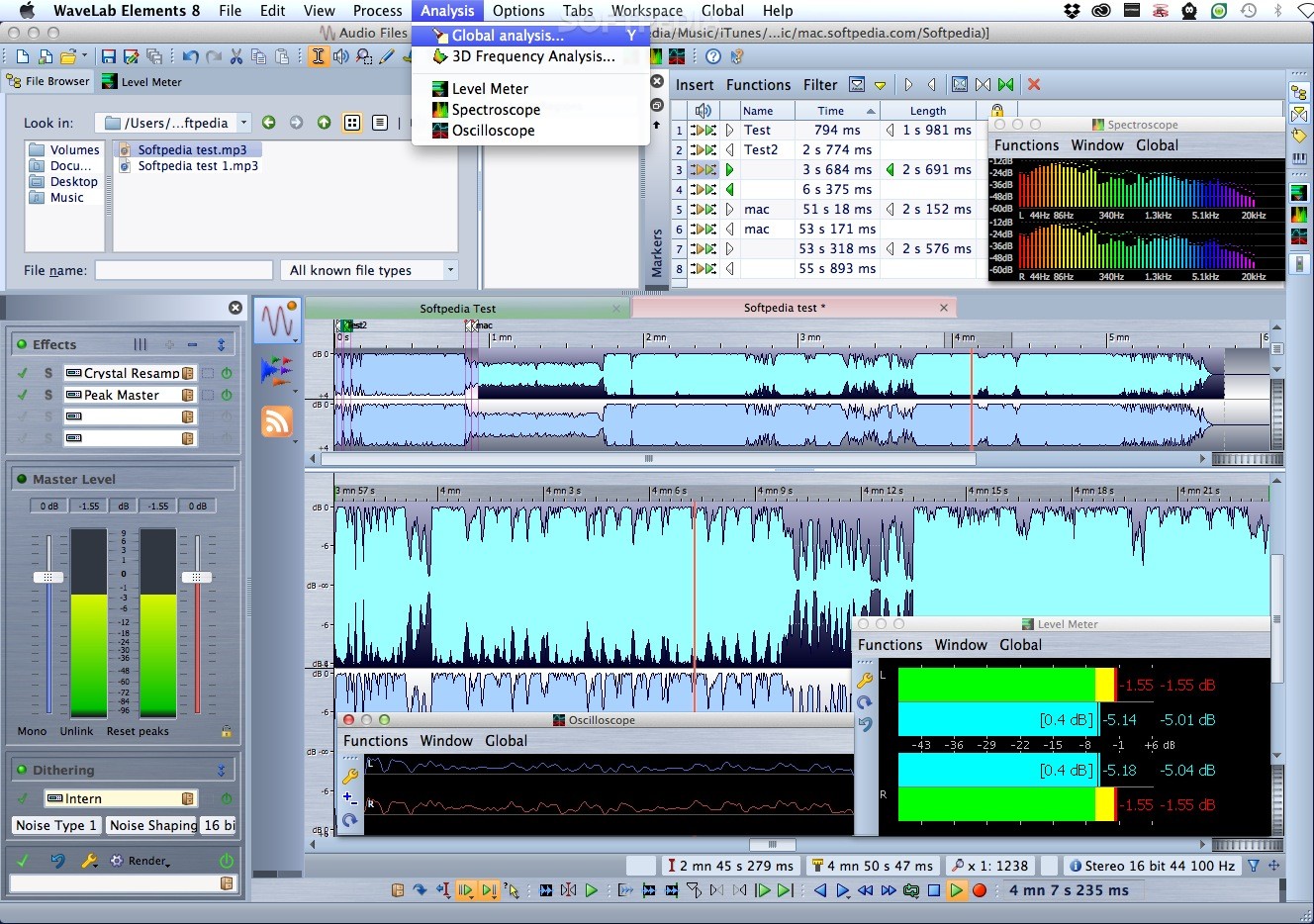 Audio analysis on a new level

One of WaveLab LE 7’s strength is the audio analysis section, including tools such as the 3D offline Spectrum view and Level Meters for the master section that allows the user to always easily keep an overview on the technical results of the current mix. 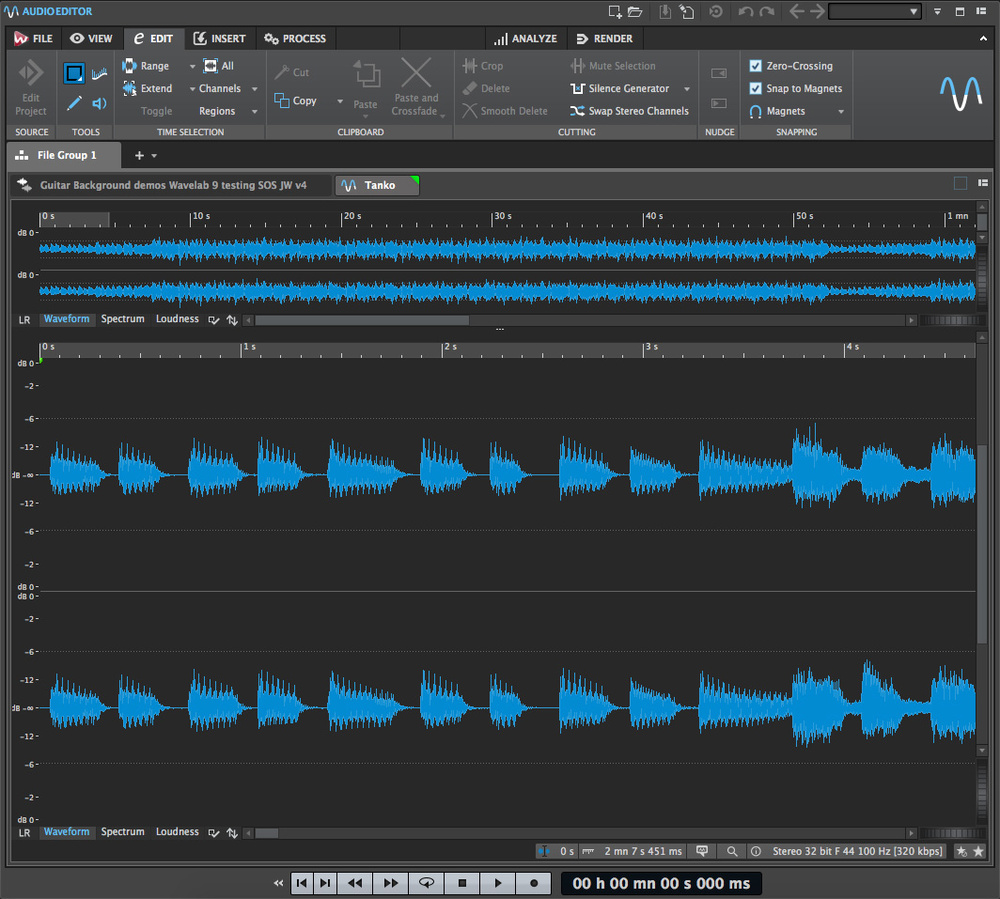 The Audio Montage of WaveLab LE 7 is the central working area, where audio files can be edited. It hosts two audio tracks as well as a basic editing feature set, including the possibility to set markers. The redesigned master section allows the use of up to three slots for the integration of plug-ins.

But there’s even more to it than that. WaveLab LE 7 also offers comprehensive support for the creation and publishing of podcasts. The powerful podcast tool offers a feature set, which can stand comparison even with the more professional WaveLab 7 versions. It’s possible not only to add parameters such as title or description, but also create several episodes and upload them directly to the server of choice.